The 2019 Moomba Masters is due to start Friday 8th March. As always Moomba will be jam packed with action. This year Jacinta Carrol will look to keep up her hot streak of winning events. The phenom from Melbourne, Oz will be a hometown favorite.

Rodrigo Miranda, fresh off a great 2019 will look to kick start his season with some great jumping. Rodrigo has been hard at training in Chile.

Jimin Jeong will also be competing at this years Moomba Masters. Jimin will be looking to make the jump finals to build off a great 2018.

You can see Rodrigo, Jacinta, and Jimin on Moombas Live webcast 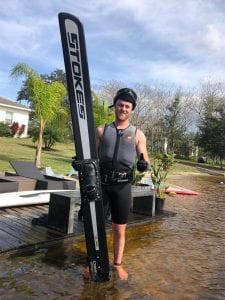 Felix Blomqvist, 21, makes flying through the air and carving round buoys look easy, as if anyone could jump over 200ft no problem and cruise into 39 off. ” But you have no idea the hours spent in Sweden with the time and sometimes the pain going into it.” Says Blomqvist, who lives in Nora, Sweden, where his Dad taught him to ski at age 4.

Blomqvist has been tournament skiing since he was 8 years old winning numerous National, European, and World medals.

Felix spends summers in Nora with his family and winters in the USA training with June and Thomas Asher at Active Skiing.  On top of training Felix competes in some of the biggest tournaments in the world, travelling to places like Spain, Canada, Mexico, and England.

We spoke to Felix recently about his up coming season, below are what he hopes will be a great year.

What age were you when you started  skiing?

I skied behind the boat for the first time when I was 4 years old.

Does your family ski also?

My two brother skis yes, they both compete at a high level and been representing the Swedish national team. My dad used to ski when he was younger then he stopped for a while but kinda picked it up again when I started skiing. My mom is a true sunshine skier and we are talking maybe a few times a year.

Who inspired you as a young athlete?

Defiantly Daniel Efverström he was my all time idol when I grew up skiing and I did try and copy a lot of stuff that he did. He was also a big part of my success skiing as a youth since he did coach and help me a fair bit. I would also say that Mike Kjellander and Daniels brother Johan have been a great inspiration for me but Daniel is defiantly the top one.

What is your greatest strength?

My greatest strength is probably my feeling for skiing and the will of always wanna get better.

What is the best part about competing?

Defiantly getting that little extra adrenaline kick that you can’t really get in practice.

What is your favorite song to listen to prior to competing?

I don’t think I have one specific song that I listen to but I do like to listen to Swedish House Mafia and Avicii, Thunderstruck and L´Amour Toujours is some stuff that’s easy to bring out when it´s go time.

What are some of your medium/short term goals? (Within the next year or so)

Defiantly under 21 worlds that’s coming up later this summer in Canada its been a long time goal of mine for a few years now and my aim is to finish at the top of that podium in jump.

What has been your greatest accomplishment on the water?

I think it is really hard to pick one that’s been the greatest but skiing JR masters a few times was fun, winning bronze at under 17 worlds after struggling with food poisoning a couple days earlier felt like a good accomplishment. But I think the best moment was when I finally broke Daniel Efverstroms (my all time idols) under 14 Swedish record in jump.

I think what excites me the most with that thought is that I get to live a life doing what I love the most. But to be honest I have to thank my sponsors that I have right now because they are the ones who makes it possible for me to focus as much on waterskiing as I want. So a big THANK YOU and shout out to Danfo, Nora Entreprenad, Swedish Diamondtools, Stokes skis, Froggy Vattensport, Body&Fitness Nora and owned.se for giving me this opportunity.

What emotions do you feel when you ski well?

Happiness for sure I love the feeling of skiing well, everything just feels like it kinda flows. I’m also a very moody person when it comes to skiing so I think everyone just enjoys it more when I ski good haha.

what would be a successful season for you?

It would be a season full of good results keeping a good and solid level with a few top shots in there too. Also staying healthy and free of injuries for a full season will have top be a success.

I do, I follow ice hockey and of course since I’m Swedish I follow cross country skiing and alpine skiing. I also follow a sport call BANDY, very Swedish sport not very big but a lot of fun.

You’re a new addition to the crayon box. What color would you be and why?

I think I would be a half black half pink one prior to my moodiness haha. Some days are great and I will be the pink side and some days I will be the black side when skiing isn’t going very well. Ä

We wish Felix all the best for the coming season and hope he achieves all his goals set in place.  Having sponsored Felix for serveral years now we are delighted to see him realize his potential.  A true passion for the sport and a desire to compete with the best, Felix is a true sportsman in every sense.  You can follow Felix on instagram or facebook